Help Us Purchase this Sculpture

“On the Domestic Front”
Lest We Forget (ANZAC Sculpture)
Artist: Lisa Baier 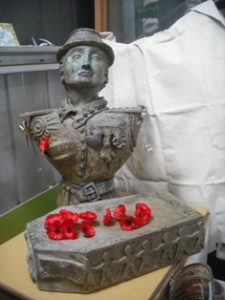 This sculpture has been created by Lisa Baier and represents the fortitude of women facing wartime adversity.    The bust has been kindly offered for sale to the Maryborough Mural Project as an addition to our project artwork.  The sculpture is currently on display at the Maryborough RSL and will soon move temporarily to the Hervey Bay RSL for display.

Donations for the Maryborough Mural Project  to purchase this piece for permanent display can be made through a donation box located at the display or by contacting us at admin@maryboroughmuralproject.org

Background to this Sculpture

Unimaginable human sacrifice has been called upon to meet and overcome the challenges and demands of war. On reflection the work itself is intended to remind us all of the tremendous fortitude, commitment and support provided by women domestically during those unsettling times.

This sculpture represents the women who ‘soldiered on’ at home in the face of wartime adversity (e.g. Indigenous, Maori and Anglo-Saxon).

From a distance the woman appears to be a high ranking military official but on closer observation, her uniform consists of domestic objects (e.g. Helmet/Colander; Epaulets/sides of cheese grater) and pertinent reliefs (e.g. Dolly pegs, Kiwi bird, ANZAC ribbon).

Accompanying this heroic and proud figure rests a symbolic coffin dedicated to those who lost their lives. Australian eucalypt leaves and an old fashioned paper cut-out of innocent children holding hands adorn the sides of the casket whilst the front and shoulders inscribe the ‘bay leafed’ title. As in modern day memorial, ANZAC poppies are respectfully and traditionally laid upon the coffin.

In completion, a copper-rust glaze has been applied to depict military camouflage clothing and minor expansion fractures enhanced to portray an aged and weathered centurion object. 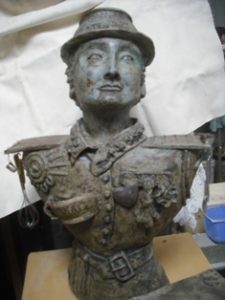